Press-Release for the 2nd Project meeting

The second meeting of the project “LESS WASTE – Development of an Action Plan for the Management of Bio-wastes at the Cross-Border Region”, organized by Municipality of Resen, was successfully completed in the framework of the cross-border cooperation program “Interreg IPA Cross-border cooperation program Greece – Republic of North Macedonia 2014-2020” on Tuesday 09/07/2019, at the Resen Municipality’s offices.

The purpose of the meeting was to discuss the progress of the project implementation and for each partner to present the actions that have been implemented so far, the ones to be implemented and any problems they face. They also decided on the next semester’s actions to ensure that the project will not face delays.

The overall objective of LESS-WASTE-II is waste prevention and the promotion of compost in the cross-border area of Greece – Republic of North Macedonia. The project aims at composting organic waste from homes and HORECA companies, as well as in organizing and optimizing organic waste management and composting at municipal level. 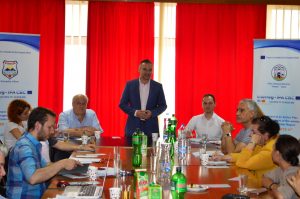